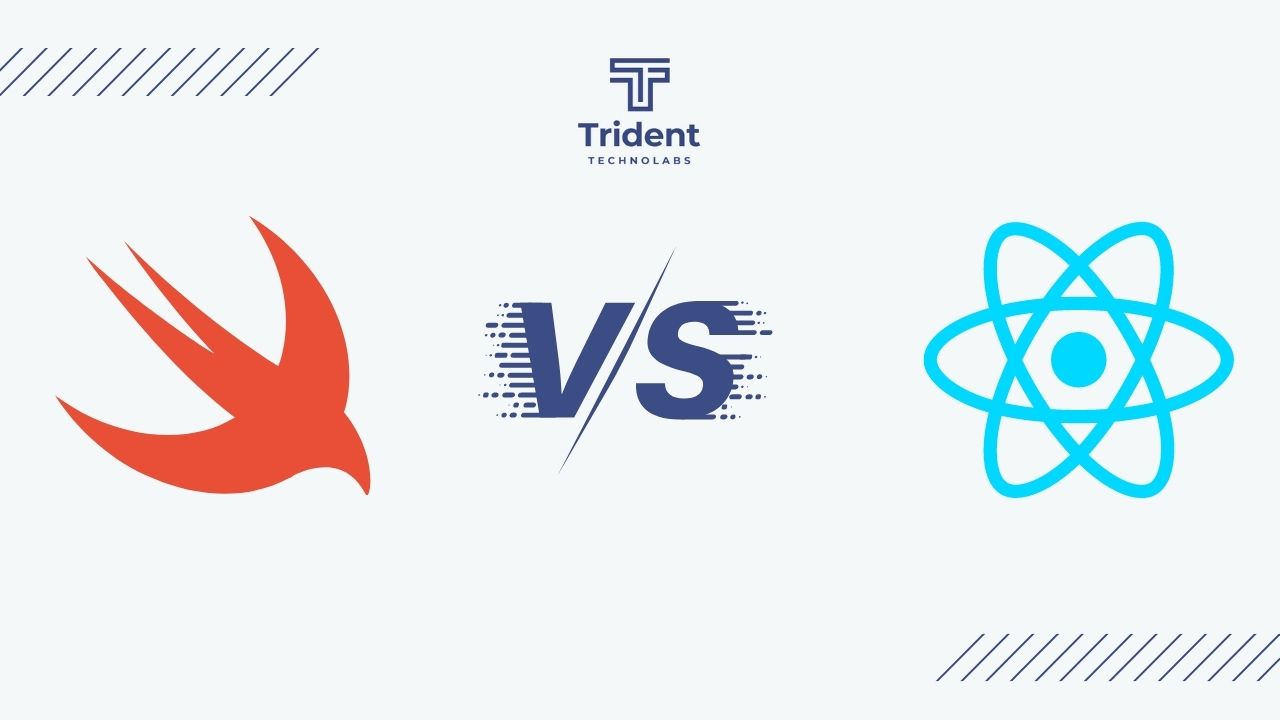 React Native vs Swift: Which One to Choose for iOS Development?

When you plan to develop an iOS application, the first question that comes to your mind is, “Should I use Swift for native app development or React Native for cross-platform app development”?

Here’s the apt answer – it’s always a good choice to choose Swift for iOS app development. But still, in some cases, React Native wins the competition as per your platform requirement.

Moreover, React Native is preferable if you want faster deployment and are looking to reduce the development costs, whereas Swift is the right choice if your budget is not limited.

Both Swift and React Native are capable enough to execute efficiently on iOS devices. However, there are some factors and parameters we should keep in mind while creating an iOS app and distinguishing the specific language.

Therefore, we have noted down the detailed information about React Native and Swift technologies and their pros and cons to help you decide the most appropriate one for your project.

So, let’s take a deep dive and understand the comparison between Swift vs React Native 2022.

What is React Native?

Talking about React Native, it’s a JavaScript framework created and supported by the tech giant – Facebook. The invention of the language was to build cross-platform mobile apps and accelerate mobile development processes.

React Native uses JavaScript, and it’s the most useful language in the world – ahead of Swift. JavaScript offers a code reusability feature, allowing developers to share up to 70% of the code between various platforms. As a result, this will help you save development time and reduce cross-platform apps costs.

With the help of React Native app development, developers will be able to write the code for both Android and iOS platforms. Then UI elements get rendered in their native versions. This means the React Native iOS app uses the same native UI as any native iOS app. This is the same scenario for the Android version.

Let’s move on to the next segment – the advantages and disadvantages of React Native before going through the main difference between React Native vs Swift.

You must have a question, how much does it cost to build a React Native app? Well, to give a fair idea, you can refer to our blog. I am sure the development cost will be worth your business investment.

Nevertheless, here are the leading apps that have been built using React Native.

We have to consider the bright and dark sides of React Native before deciding on React Native or Swift. Let’s see what pros the language has to offer when you hire React Native developers.

Since native apps are designed for a particular OS, they take full advantage of the device’s processing speed. The apps have a good, error-free performance and are easy to use.

React Native has around 33,000 libraries and packages, while Swift has only 3800 packages. The actual figures show that React Native is way ahead in terms of libraries.

It is easy to integrate native apps with various devices like GPS, Camera, and touchscreen. Moreover, complex features like VR, AI, IoT, and AR can be seamlessly integrated into native apps.

Native apps are secure and dependable because they meet all operating system rules. These apps are evaluated and authorized by the App Store. Hence, they are highly secure and reliable.

Despite all of React Native’s great features, it does have certain drawbacks. However, React Native community is constantly striving to resolve these difficulties.

As we know, both platforms – iOS and Android, have their own guidelines for publishing apps. This becomes a big trouble for developers to build high-quality custom UI for React Native apps.

When comparing React Native vs Swift, the app development speed using React Native is faster due to a single code source; however, the process of testing takes longer. When it comes to testing, React Native apps demand more effort and precision, as errors are more likely to surface on both platforms.

Developers may need to write custom wrappers in order to integrate native modules, components, and APIs into the project, which is time-consuming.

Swift is a modern and compiled programming language developed and maintained by the Apple team and open-source community to build native iOS applications for every Apple device. Released in 2014, Swift is considered a multi-paradigm and general-purpose language.

Swift is designed to develop iOS apps for watchOS, macOS, tvOS, and Apple-powered devices. The primary goal of Swift is to gain more attention from developers for iOS development services. Since Swift offers concise and expressive syntaxes, the programming interface is interactive.

Primarily, Swift was designed to replace Objective-C, which was the programming language of Apple. Thus, the following code practice is very convenient and has practically no loopholes. This is the best way to develop an iOS app. Therefore, it has gained a lot of attention in mobile app development services.

Some popular and famous brand apps are developed using Swift. We’ve compiled a list of the finest apps for better comprehension.

Do you know why companies have shifted their focus to Swift to build iOS apps? Let’s find out its advantages in the coming section.

Swift has robust typing and a strong error handling system. It is effective in preventing errors and code crashes in the production environment.

Swift is a future-proof programming language. So, developers can easily add any new functionality. As a result, these apps are usually easier to scale as compared to React Native.

Performance enhancement and safety are the primary factors of Swift as it was created to replace the Objective-C language while considering Swift vs Objective C. At the time of its initial release, it was said to have a 40% better performance.

Swift applications take less time to install and consume less memory storage on the device because they are lightweight. The language was also built with native iOS development in mind, giving developers more access to the native device’s features. As a result, Swift-powered apps will look and perform better.

Swift has an active open-source community that backs the platform. Also, it’s very easy to learn and understand for newbies.

Planning to Build Your Next iOS App with Swift?

Upscale an App with Us

Are there any major disadvantages of Swift that you should be aware of? Let’s understand its cons in the given section.

Despite the rapid growth of Swift, it still has a small pool of developers compared to other programming languages. It can be difficult to hire a Swift developer.

Only for Apple Devices

Swift can only be used on native devices because it is a native platform. As a result, if you want to create apps for both Android and iOS, you’ll need to create two different apps.

The primary difference between React Native and Swift is that React Native is suitable for cross platform development, whereas Swift is the right choice for developing native iOS applications.

Let’s consider the parameters below to compare Swift vs React Native and decide which could be the suitable one for your iOS app development.

The performance of React Native vs Swift depends on multiple factors such as GPU speed, CPU consumption, memory usage, and many more.

While talking about tests, React Native beats Swift on memory usage and GPU speed, while Swift is ahead of React Native in CPU consumption. In addition, developers can easily embed native codes in the React Native applications and use various tools for tasks.

Thus, in terms of performance, React Native wins the competition against Swift.

With the usage of Swift, developers can easily create amazing UIs and visually appealing apps for iOS platforms. Moreover, Swift developers can use SwiftUI from scratch to deliver a completely native and better user experience.

Talking about React Native, it uses JavaScript libraries to build user interfaces. Developers can easily create platform-centric versions of components for a native-like experience. With the help of JavaScript and declarative UI, React components wrap native code and communicate with native APIs. Therefore, it’s very easy to create amazing UI with the help of JavaScript but very difficult to stay updated with changes and advancements that happen in the native environment.

Swift holds the power of every possibility of the platform to build Native applications. Moreover, Swift beats React Native in the game of Swift vs React Native when it comes to handling heavy tasks and visual effects. Thus, Swift delivers more stability to the iOS platform.

Despite being a leader in cross-platform frameworks in the market, React Native is not preferable to creating native apps. The primary focus of React Native is to utilize internal APIs and libraries to execute applications smoothly. This means there could be many layers in the development process, making the application a bit unstable.

Since JavaScript supports React Native, the language has been in the market for many years. It’s getting popular due to its easy learning curve and supports various tools as well. Thus, developers find it very easy to learn and create a codebase in React Native as compared to Swift.

On the other hand, Swift developers can conventionally produce native iOS apps. Since Swift came into existence to overcome the legacy of Objective C, it has made processes smoother, eliminating the drawbacks.

While talking about React Native for iOS app development, developers find the process quite simple and easy. But here, the web development process is different from the app. Therefore, the developers don’t feel at home while working with React Native. However, React Native has various detailed documents and extensive libraries that could help developers learn the language easily.

On the flip side, Swift has a very cutting-edge learning curve. However, Apple has released an official document to help developers understand the language, its fundamentals, and features with ease. Apart from that, Swift has a wonderful feature called Swift Playgrounds that makes the learning curve smooth even for professionals with zero technical experience.

While talking about platform maturity for React Native and Swift, they both are quite young in the industry. React Native was released in 2015, whereas Swift in 2014. However, both communities welcome more robustness with each version update.

Like Swift language, React Native is not a completely native language for iOS app development despite being a native app builder. React Native functions as a bridge between iOS platforms and code. When it comes to intensive computational and graphic work, Swift performs excellently.

If you are planning to develop an iOS application, it’s very cheap to hire a React Native developer. Albeit, you will not find much difference in hiring a single programmer for both Swift and React Native programming languages. Later, when you hire a team of developers, they become cost-effective or cheaper.

Furthermore, React Native does not compromise the project quality in addition to being cost-effective. As a result, it becomes a win-win situation for organizations in the long term.

Since the JavaScript language is very popular among the developer community, it’s very easy to find JavaScript developers. Besides, Swift is comparatively new. Thus, there are fewer chances to find a team of professional Swift developers or Swift development companies.

As per the data from Stack Overflow, around 65% of developers would consider JavaScript as their preferred language. This data proves its popularity as compared to Swift.

As we know, React Native is an open-source programming language and is supported by many professional developers across the globe, whereas Apple developers maintain the Swift language. But Swift developers can get technical support from public platforms.

React Native has in-depth, concise, and accurate documentation, and Swift has a consistent documentation update, which is helpful as well.